Reality TV, the Economist and Euthanasia 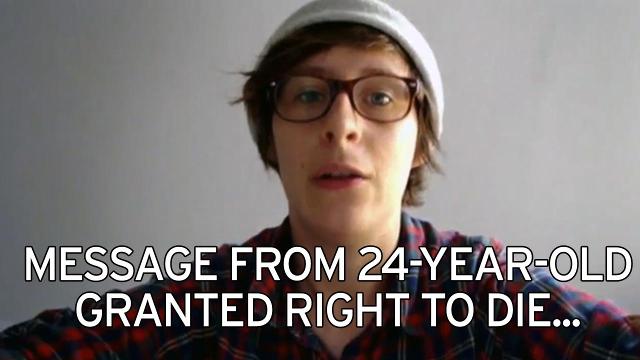 Because media coverage of suicide could easily lead to copycat suicides, in 2008 the World Health Organization issued a long list of guidelines for journalists. It advises them to: “Avoid language which sensationalizes or normalizes suicide, or presents it as a solution to problems”, “Avoid providing detailed information about the site of a completed or attempted suicide”, and to “Show due consideration for people bereaved by suicide”.

Campaigns for assisted suicide and euthanasia ignore this. In addition to sympathetic headlines, media organisations are producing YouTube videos which paint a glowing picture of assisted dying, illustrate clearly how it is carried out, and draw teary relatives into the story.

In recent months there have been numerous examples. A 29-year-old California woman, Brittany Maynard, made two videos with the help of the assisted suicide lobby group Compassion & Choices which were seen by millions of people, before she died through assisted suicide in Oregon. Australia’s SBS network recently filmed a Belgian doctor giving an elderly, depressed woman a lethal barbiturate. She died on camera.

The latest development is a 21-minute video made by The Economist and part-funded by Virgin Unite, a charity financed by British billionaire Richard Branson, about a 24-year-old Belgian woman suffering from severe depression who has asked for euthanasia. Anticipating objections, the first frame reads: “Warning. There are some scenes in this film which some viewers may find distressing.” It is a necessary precaution.

Although outwardly normal, Emily is severely troubled. There is a graphic scene in which she displays the scars on her arms from self-mutilation. In another, three doctors describe to her exactly how she will die, and another in which a psychiatrist explains magisterially why euthanasia may be suitable for her.

The Economist’s journalist and cameraman must have spent days with Emily, staging scenes with her doctors, her mother and her friends. They are hardly detached observers; instead they become supporters of her choice.

Their documentary transforms a painful mental illness into the voyeurism of reality TV. Euthanasia is often described as the most intimate and personal choice a person will ever make. But on YouTube a fragile, suffering woman has become a tool for The Economst’s international public relations campaign.

One hopes that The Economist has heeded the last item in WHO’s advice to journalists: “Recognize that media professionals themselves may be affected by stories about suicide”.

In the end, the very end, the moment in which the doctor arrives to give her a lethal injection, Emily stepped back and said that she did not want to die. Perhaps the extra attention given her by the journalists made her feel loved and comforted. Perhaps, as supporters of euthanasia argue, knowing that death was readily available gave her courage to soldier on.

Was The Economist relieved – or disappointed? It’s hard to say.

The world’s most admired news magazine is campaigning strongly for the introduction of legalised doctor-assisted dying around the world, not just in the UK, and not just for terminal conditions, but for mental illness as well. In addition to “24 and Ready to Die”, it has also created a brief video advertisement which aired in London and Berlin, “Could you live a life like this?”.

For Zanny Minton Beddoes, the new editor-in-chief, this is a crusade. She says: “For The Economist, the case for allowing doctor-assisted dying relies on personal choice and individual autonomy. Our liberal values and respect for human dignity mean that for this paper, doctor-assisted dying is a cause worth championing.”

She does not appear to be aware of recent research showing that suicide rates increased by at least 6 percent with the legalisation of physician-assisted suicide (PAS). In a fine-grained statistical analysis data from the four American states where it is currently legal, British academics David Albert Jones and David Paton showed that “the introduction of PAS seemingly induces more self-inflicted deaths than it inhibits”.

Has Ms Minton Beddoes considered the possibility that her videos may already have provoked some people to commit suicide? Crusades are bloody things: there are always casualties.

A key plank in the assisted dying platform is that it is different from suicide. Even if that were the case, surely immense discretion is needed to prevent vulnerable people from being seduced rather than persuaded. But there are no guidelines for reporting euthanasia. Does the WHO rule book need to be rewritten?

Michael Cook is the Editor of MercatorNet and BioEdge. This article was originally published on MercatorNet. Read the original article.