Dr. Arnold Gold, 92, Dies; Made Compassionate Care a Cause 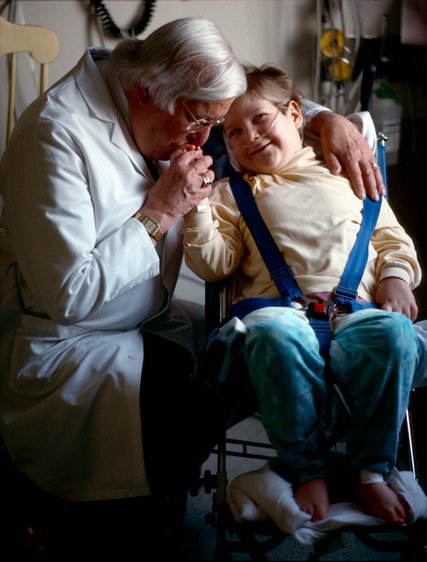 Dr. Arnold Gold, a pediatric neurologist whose belief in the importance of an empathetic bedside manner led him and his wife to create a foundation to inspire young doctors to practice compassionate patient care, died on Jan. 23 in Manhattan. He was 92.

“You’re only half a physician if you’re just good at your craft,” Dr. Gold said in an interview in 2016 for the Arnold P. Gold Foundation. “Unless it’s coupled with patient-centered care and humanism, it’s suboptimal care.”

Dr. Gold, who treated patients and taught for more than 50 years at the Vagelos College of Physicians and Surgeons, part of Columbia University Medical Center, had a cheerful but authoritative demeanor. On rounds, he wanted to know about the life of the patient, not just his vital signs. He talked face to face with his young patients, often sitting on the floor and playing with them.

“He enjoyed kids and he dealt with them in a wondrous way,” Dr. David Mandelbaum, a former student of Dr. Gold’s at Columbia who is a professor of neurology and pediatrics at the Brown University Alpert Medical School, said in a telephone interview. “He always sensed what a kid was able to do, not what he couldn’t do.”

He was also concerned with the patients’ parents, spending time, for example, to understand the effects that a neurologically damaged child’s condition had on their marriage and finances. And if he could not give them hope, he gave them answers.

“He told me the worst news in the most loving way,” Amy Gleicher said in a telephone interview, recalling Dr. Gold’s diagnosis concerning her year-old son, Max, in 1993. “He told me my son was mentally retarded in such a way that I had dignity and my child had value.”

Dr. Gold continued his humane approach as advances like M.R.I.’s and CT scans revolutionized medicine. But he became distressed in the 1970s and ’80s, he said, as he watched students and other doctors become too focused on technology and not enough on the people they were treating.

“So one day in 1988,” he said in the 2016 interview, “I was making rounds with the students and residents and a student presented me ‘the brain tumor in 209.’ And I said: ‘The brain tumor? Isn’t there a child involved in this? Tell me about the child, tell me about the family. Tell me how this is impacting on the family. Do you know any of this?’ ” They did not, he said.

At home that night, he told his wife of his concerns about where medicine was headed. As he recalled, she told him, “You know, Arnold, I’m tired of you griping about medicine. Do something about it or shut up.”

They began the Arnold P. Gold Foundation together in Englewood Cliffs, N.J., in 1988, hoping to clone Dr. Gold’s humane approach to patient engagement. They started white-coat ceremonies at medical schools in which students pledge the Hippocratic oath in the early days of their education, rather than at graduation, as is common practice. Dr. Gold felt that graduation was too late to set expectations for the clinicians they would become.

“This should be established at Day 1,” he said in the interview.

Arnold Perlman Gold was born in Manhattan on Aug. 8, 1925. His father, Michael, a Jewish native of Dublin, and his mother, the former Rebecca Perlman, were lawyers. As a youngster, Arnold read “Arrowsmith,” Sinclair Lewis’s 1925 novel about a doctor’s search for truth.

“Arnold was very idealistic and wanted to save the world,” said Dr. Brian Benson, Dr. Gold’s son-in-law, “and he was very impacted by that book.”

In 1938, when Arnold was 13, his father died, and his mother sent him to live with an aunt in Galveston, Tex., believing that he might get a better chance at an education there. He attended the University of Texas, Austin, but left to serve stateside in World War II as a Navy corpsman.

During his internship at Charity Hospital in New Orleans, Dr. Gold tended to 30 children with polio who were in iron lungs. His mentor there, Dr. Margaret Smith, “taught me a lot about patient-centered care, and she also led me into the field of pediatrics,” he said in 2016.

“I was originally going to be an internist, an endocrinologist,” he said.

When he was chief resident at Cincinnati Children’s Hospital, part of his work placed him in Dr. Albert Sabin’s laboratory while Dr. Sabin was developing the oral polio vaccine. While in Cincinnati, Dr. Gold rode horseback for the Frontier Nursing Service to treat people in rural Kentucky.

He returned to New York as visiting chief resident at the Babies Hospital at the NewYork Presbyterian-Columbia University campus (now Morgan Stanley Children’s Hospital) before beginning his long career at Columbia in child neurology.

Dr. Gold lived with facioscapulohumeral muscular dystrophy, which affected his muscles later in his life and made it difficult for him to breathe. He treated patients until he was 88 and spoke at last year’s white-coat ceremony at the College of Physicians and Surgeons at Columbia.

Besides his wife, the former Sandra Orenberg, who has a doctorate in counseling, he is survived by two daughters, Amelia Gold and Maggie Gold Seelig; a stepdaughter, Jennifer Arnold; a stepson, Stephen Silver; and 13 grandchildren. His stepson Jeffrey Silver died in 2010.

Dr. Gold recalled that in creating his foundation, his goal was to change the course of medical education.

“My colleagues were very distressed,” he recalled in the 2016 interview. “They looked at me as sort of, ‘What’s happening to Arnold?’ And one of them even said to me, ‘I think you’re smoking opium,’ and, ‘How could you ever believe that you can change medicine?’ People were not very encouraging.”

The foundation has also inducted 30,000 students, residents and faculty into its Gold Humanism Honor Society to recognize their compassionate patient care. The designation became prestigious enough for medical students to include it in applications for residencies.

Dr. Darrell G. Kirch, the president and chief executive of the Association of American Medical Colleges, said in an email that the honor society “demonstrates that, increasingly, the medical profession recognizes humanistic attributes such as empathy and compassion as being every bit as important as academic achievement.”

He added, “This is just one more element of Dr. Gold’s outstanding legacy.”